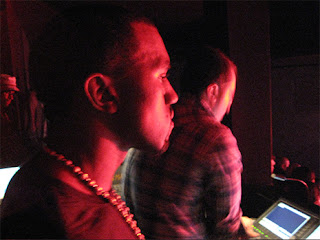 Out of the many things Kanye West had to say last night after playing his new album to a packed theater, the one that rung truest was Kanye's claim to have made an album for the people. That may sound cliché, especially from a dude who also wouldn't give up the designer of his sneakers, but Graduation is exactly that, a collection of mood jams to get regular folks through their days. Kanye has become the Deepak Chopra of music, only he claims our happiness will come through his self-awareness instead of our own. And having listened to Graduation (even the singles we've heard a hundred times by now) on some loud ass speakers, we're finding it hard to disagree. It is front to back anthems, tinted like "Planet Rock" with space-age electronic music and escapist fantasies, from "Good Morning" to Jay-Z ode "Big Brother," and Kanye is clearly proud of it, as was A-Trak, who sat in front of us rapping along all night and throwing his hands up to the crazily crazy where-was-this-all-summer T-Pain team-up "The Good Life."

Kanye came out beforehand to introduce himself, but tellingly kept it quick, playing the whole album through with visual assistance from a blinding light show and clips of Akira, Old Boy, Tron, 2046 and some Japornime we didn't recognize, before reappearing for a solid hour of Richard Pryor-like riffing on each and every song. Mos Def supplied the peanut gallery from right behind us. There were free vodka smoothies, popcorn, and disposable Pastelles for all of us, but most importantly there was an album that didn't let us down. Check a few photos from last night after the jump (thanks GT!) and stay tuned as we'll surely have more to come before September 11th.
Posted by Brik Mason at 7:46 AM

Email ThisBlogThis!Share to TwitterShare to FacebookShare to Pinterest
Labels: thefader.com