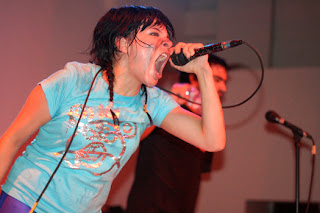 Despite axing a run of gigs that were to occupy the next two weeks-- citing illness and exhaustion-- Bonde do Role looked neither terribly ill nor exhausted at Portland's Holocene this past weekend. Instead they were all smiles, fancy-footed antics, and Laser-guided fun-- although apparently somebody's panties got set on fire.

After a couple weeks' respite, Bonde do Role return to the road October 20 in Iceland. They might want to arrive a few days early: I hear the spas over there are second to none.
Posted by Brik Mason at 8:07 AM

Email ThisBlogThis!Share to TwitterShare to FacebookShare to Pinterest
Labels: PITCHFORKMEDIA.COM