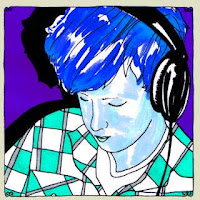 It's the fragile moments that give the harshest shivers, the violent ones that could make you worry that you're losing it, that things will get worse before they ever get better. Kate Cooper and Damon Cox of the Australian band An Horse bow at the alter of these kinds of fragile moments, finding them to be the intoxicating ones that will eventually make you strong if they don't wipe you out before then. Cooper sings about the aspects in life after they've come to a boil. We don't really get too much of the back story in the songs on the band's EP "Not Really Scared," but she swoops us into the middle of the firestorm, at the place where she's out on the ledge and looking for company up there. She wants to share the experience of the elevated winds rushing across wet cheeks and the pulling at clothes, pulling at hair and losing it up there where the pigeons are perching and cooing, where the window washers get frightened. The scenes that she and Cox reveal are scary situations that may never return to a satisfying normal. It makes a lot of sense that Canadian band Tegan & Sara have taken such a liking to this guitar and drums two-piece as there is the same immediacy and the same hectic urge to wonder and an even more hectic need to know why all of this shitty shit is happening and keeps happening. It never seems to subside and then suddenly, the room stops spinning, the faces stop blurring and a calm tries to happen, just momentarily, where things don't seem to be all that bad and it's when you hear Cooper considering her new line, "I believe in horizons now." It feels as if there might be a little flower poking out of the snow, but whether it will survive is still questionable. An Horse music is a sunny day in dead cold of winter, as if there is potential in the snow drifts and there's a light at the end of the bleakness. It all feels warm if you don't stand too close to the windowpanes and you don't look straight down. As Tegan & Sara sings on a song from "So Jealous," "I feel like I wouldn't like me if I met me," Cooper strikes a similar sentiment on "Scared As Fuck," offering, "I got scared that you might be a better me than me." It's such a personality conflict that could only come from a self-planted seed of doubt and apprehension. It's about a self-love and confidence that is lacking and yet is an adorable bit of humbleness and humility. It's not a give up on me feeling, but one that is just going to keep getting battled through and worked with as Cooper sings, "I'm trying to get you over it…I'm trying to be brave."

An Horse Official Site
Posted by Brik Mason at 6:38 PM

Email ThisBlogThis!Share to TwitterShare to FacebookShare to Pinterest
Labels: daytrotter