In “Berries and Bulls,” a premiere by the choreographer Tiffany Mills, one side of the stage features towers of stacked paper and books. The dancer Jeffrey Duval, with boyish concentration — though he is well into manhood — sits in front of them and exactingly folds a paper airplane, pressing his index finger down hard on the surface to make perfect creases. He reclines on his back and rests the airplane on his chest. It’s not the smoothest of takeoffs.
Enlarge This Image 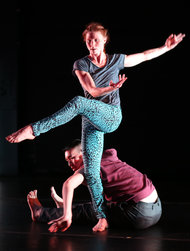 A sortable calendar of noteworthy cultural events in the New York region, selected by Times critics.
Paper airplanes are a common sight throughout this hourlong dance-theater work, seen on Friday at the Fishman Space at the Brooklyn Academy of Music. It was preceded by a shorter piece, “The Feast (Part 1),” which featured duets in which Ms. Mills’s penchant for the push and pull of contact improvisation was deeply felt.
Ms. Mills is a choreographer who relies on text and partnering to explore human relationships. Along with Mr. Duval, “Berries and Bulls” features Kevin Ho, Emily Pope-Blackman and Petra van Noort, as well as an ensemble of 10 others, with whom Ms. Mills looks at the line between attraction and revulsion through the contact of bodies. We don’t only see that point being made; we also hear it, repeatedly.
“Does it matter if I touch you?” Mr. Duval asks Ms. Pope-Blackman.
“Absolutely,” she replies. “Touch always matters.”
But some scenarios in “Berries and Bulls,” which has dramaturgy by Peter Petralia, also examine the choreographic process. When Mr. Duval and Mr. Ho lie on their backs for an extended period, Ms. van Noort tries to coax them up. “Come on, guys — this is supposed to be a performance and not a sleepover,” she says. “Can we do something a little bit more animated?”
It’s a dangerous line to insert into such a tedious work, where the subject matter, which hints at the freedom and danger of taking flight, slips into melodrama, with couples bickering. The dancers, with thin voices and self-conscious delivery, taunt one another with sarcasm, all the while pulling, poking and prodding one another’s bodies. The movement isn’t much, but it also has little chance to develop: time and again, the chatter drowns it out.

A version of this review appeared in print on June 5, 2013, on page C2 of the New York edition with the headline: Attraction, Revulsion and Discussion.